It has all the features that other Cateye lights are carrying all the while, now it is added with acceleration sensor feature so that other road users are able to read our movement signal easier. 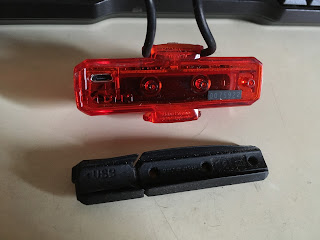 Unlike most Cateye lights which are mounted on the bicycle with a separate plastic mount, Kinetic is mounted straight on bicycle tube with a firm rubber band and depending on your seat tube width, it can be very firmly attached to your tube. Such setting is to allow the movement sensor in the light to detect the movement of your bike so that it can blinked accordingly. The back of Kinetic is covered by a piece of rubber cover for water resistance.
Brightness and modes
Cateye Rapid X2 Kinetic can be switched on by pressing the on/off button (which is also the only button of this equipment) by the side of it.

If you want to have the maximum brightness along your ride, then the Kinetic mode is preferred and if you are looking for slow battery consumption, then you have to go for flashing mode. Regardless of which mode you are on, the light will turn to maximum brightness (50 lumen) whenever it senses a sudden stop by acceleration sensor to indicate braking for other road users.

According to official statement, the maximum brightness of this light is 50 lumen and it covers 180 degree radius.

Trust us, you don't wanna stare straight to the light when it is on its maximum brightness, it is so bright that it can cause temporary blindness... 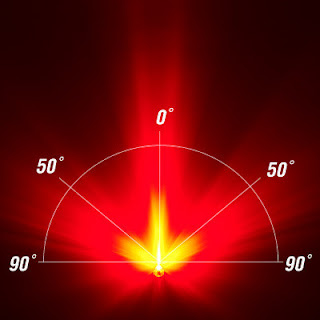 Battery Life and Charging
According to printing on the packaging:
Constant - 5 hours
Flashing - 30 hours
Kinetic - 16 hours
I was using this light during my BRM400 (with full charge before I start cycling), the light was able to survive a 26 hours ride under Flashing mode (without charging) thus Cateye did produce a promising result for the battery life portion. Full charge from a completely run-out-battery-condition of this Li-ion cell light (we don't recommend you to do so because this will shorten the cell life span) takes about 2 hours (which is also mentioned in manual).

One worthy mention of this product is that it has a battery auto save function where it will automatically changes to flashing mode (if you are on the other 2 modes) if the light runs low on battery, which is indicated by the indicator located at the same spot where you switched it on.
Conclusion
A useful and worth to each cent lightning unit which will help other road users to be more aware of cyclist's acceleration (decceleration and braking). Bright and wide angle, on top of that it lasts for 30 hours with automatic power saving.
Pro: Automatic battery saving, brake indicator
Con: Tight rubber band which may seem not big enough for big seat tube